Newport Corporation today reported financial results for its third quarter and nine months ended September 27, 2014, and its outlook for the fourth quarter of 2014.
The company noted the following regarding the third quarter results:
- Net sales of $146.3 million;
- New orders of $147.3 million;
- Net income attributable to Newport Corporation of $9.5 million, or $0.23 per diluted share, when measured according to generally accepted accounting principles (GAAP);
- Non-GAAP net income of $13.6 million, or $0.33 per diluted share, excluding the amortization of intangible assets, stock-based compensation expense, acquisition-related, restructuring and severance costs, a one-time tax benefit and the tax impact of the excluded amounts;
- Cash generated from operations of $5.4 million, and a net debt position of $2.4 million at the end of the quarter; and
- Repurchases of approximately 242,000 shares of common stock for approximately $4.5 million during the quarter.
Commenting on the results, Robert J. Phillippy, Newport's President and Chief Executive Officer, stated, "We grew our third quarter sales by 5.2% and our non-GAAP net income by 9.2% on a year-over-year basis. In addition, we already have excellent momentum in the fourth quarter, as exemplified by some significant orders we have recorded in October. Earlier this week, we received a $25.7 million order from an existing customer for ultrafast lasers used in surgical applications, which we expect to ship within the next 18 to 24 months. We have also received several substantial new orders from a key semiconductor manufacturing equipment customer relating to the collaborative development program for next generation semiconductor equipment that was launched late last year. These orders make us very confident that our book-to-bill ratio for the full year 2014 will be well in excess of 1.0, and that our backlog entering 2015 will be at the highest level in our history."
Sales and Orders
Newport's sales and orders by end market were as follows: 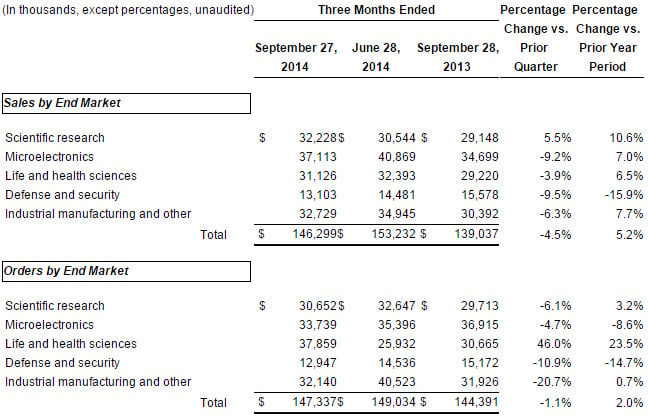