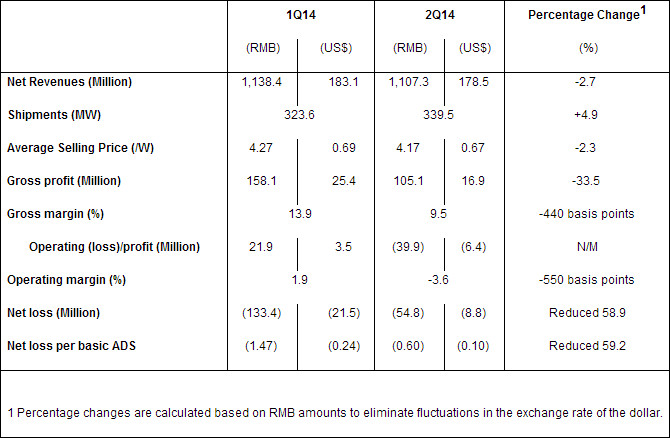 Mr. Seong-woo Nam, Chairman and CEO of Hanwha SolarOne commented, "The second quarter of 2014 showed an increase in shipments and a significant reduction in our net loss position. Our gross margins were driven down by a lower average selling price, reflecting a decreasing proportion of sales from the higher-priced EU market, particularly the UK, and an increasing proportion from the relatively lower priced China market. We maintained our strong position in Japan and began shipments to several newer emerging markets. We continued to maintain tight control over operating expenses."
Chairman Nam noted, "We see a number of positive developments for our business for the remainder of this year, including 1) strong growth in quarterly shipment volumes beginning in the third quarter, driven especially by good visibility in China 2) opportunities for cost reduction due to increased efficiency and improved utilization for our ingot and wafer manufacturing lines, 3) the introduction of new four busbar cell technology, 4) reduced processing costs from decreased use of raw materials 5) increased automation of our production lines and 6) the addition of new cell and module lines. Module manufacturers continue to compete intensely on price and we expect to continue to see decreasing average selling prices near term that make gross margin expansion challenging in the near term."
SECOND QUARTER 2014 RESULTS
Total net revenues were RMB1, 107.3 million (US$178.5 million), a decrease of 2.7% from RMB1,138.4 million in 1Q14, and a decrease of 6.4% from RMB1,182.8 million in 2Q13. The decrease in total net revenues in 2Q14 compared with 1Q14 was primarily due to a lower average selling price. Module processing services accounted for approximately 13% of revenues.
PV module shipments, including module processing services, were 339.5MW, a 4.9% increase from 323.6MW in 1Q14, and a 5.7% increase from 321.2MW in 2Q13. 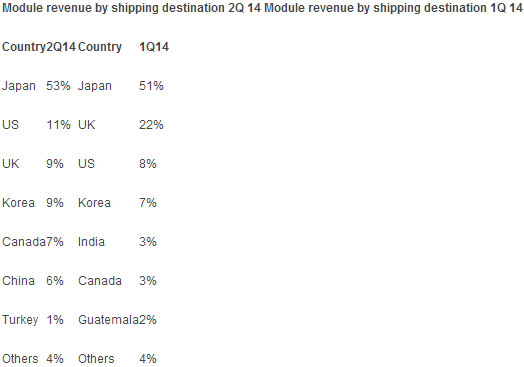