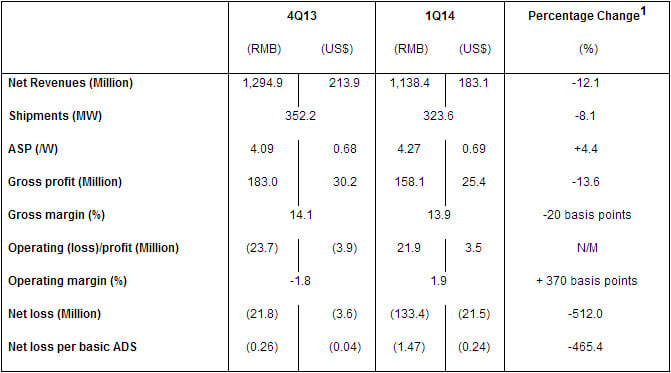 Mr. Seong-woo Nam, Chairman and CEO of Hanwha SolarOne commented," Our first quarter results were primarily impacted by a slowdown in demand in China due to seasonality and delayed project installation, as customers anticipated more lucrative government subsidies later this year, and the unexpected devaluation of the Renminbi, which resulted in a foreign exchange loss for the quarter. Our core business remained strong. We continued to maintain our strong position in the Japanese market and made good progress towards filling our allocation in the EU. Our average selling prices remained firm at the high end of peer averages, and we continued to effectively manage operating expenses."
Chairman Nam noted," Beginning in the second quarter and for the remainder of the year, demand and shipment volumes look promising. We anticipate up to a 14% increase in shipments from the first quarter to the second quarter. China demand is beginning to warm and a strong second half of the year is expected in this market as the government increases incentives and improves the availability of credit for select companies. We expect business opportunities to develop further in China with cooperation from our strategic partners, including downstream project development."
Chairman Nam concluded," There is good potential for cost reduction for the remainder of this year, especially as we increase utilization and reduce costs at our internal ingot and wafer operation. Conversion of existing module lines to full automation beginning mid-year will also cut costs and improve quality. Synergies with Hanwha Q CELLS remain strong, as the companies exchange technology, share manufacturing expertise, integrate supply chains, in each case where practical and appropriate, and continue a meaningful toll arrangement. Finally, we are now prepared to increase cell and module capacity to 1.5 GW and 2.0 GW respectively, positioning us to enter 2015 with higher capacity to meet a significant anticipated increase in demand."
FIRST QUARTER 2014 RESULTS
- Total net revenues were RMB1,138.4 million (US$183.1 million), a decrease of 12.1% from RMB1, 294.9 million in 4Q13, and an increase of 2.3% from RMB1, 112.9 million in 1Q13. The decrease in total net revenues in 1Q14 compared with 4Q13 was primarily due to lower shipments.
- PV module shipments, including module processing services, were 323.6MW, an 8.1% decrease from 352.2MW in 4Q13, and an 11.9% increase from 289.1MW in 1Q13. 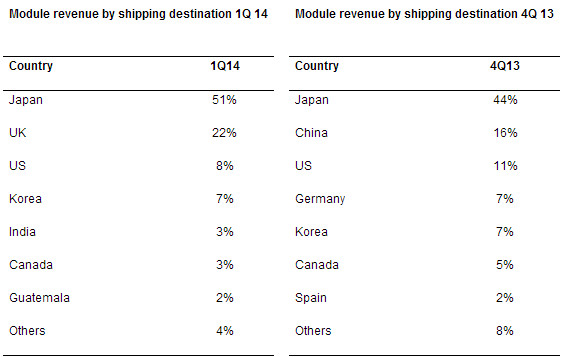