CVD Equipment Corporation announced its first quarter 2017 financial results.
Revenue for the first quarter was $9.7 million, an increase of 31.8% over the prior quarter and 92.9% from the same period last year. During the quarter the company received approximately $12 million in new orders. Backlog as of March 31, 2017 was over $30 million, an increase of 8.9% over the fourth quarter and 787% over the previous year.
"Solid execution coupled with ongoing customer momentum resulted in our strong first quarter performance," said Leonard Rosenbaum, President and Chief Executive Officer. "During the quarter, we began to develop new equipment for our recently acquired Tantaline® technology and continued to find new applications for our growing product line. We expect 2017 to be a year of solid growth as we focus on expanding and diversifying our customer base to position the company for continued long-term growth and profitability."
Net income for the first quarter was $1.0 million compared to $770,000 in the prior quarter and a loss of ($338,000) a year ago. Net earnings per diluted share increased to $0.16 from $0.12 in the fourth quarter and a net loss of ($0.05) in the first quarter of 2016. 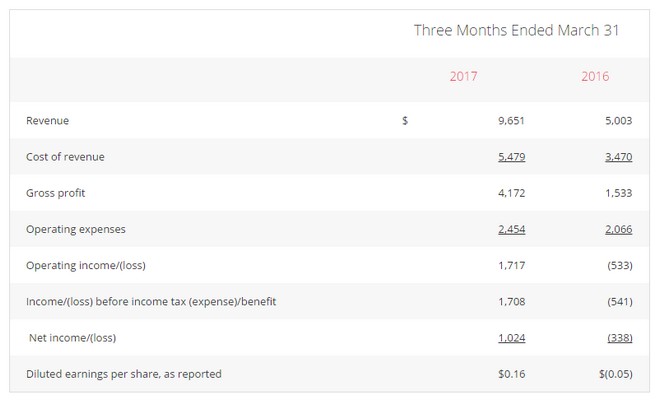