Kyocera Corporation today announced its third-quarter financial results for the fiscal year ending March 31, 2016. The results are summarized below, both as an aggregation of Kyocera's first three fiscal quarters, and as the third quarter alone. 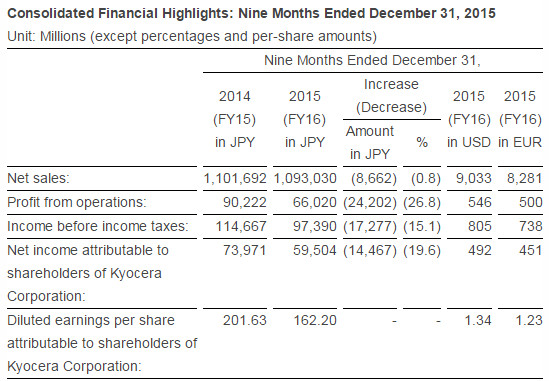 Summary of Nine-Month Consolidated Financial Results
During this period, the economic environment surrounding Kyocera Corporation and its consolidated subsidiaries was characterized by growth in the automotive market, mainly in the United States and China, and an expanding market for smartphones globally.
As compared to the year-ago period, Kyocera's sales of components used in smartphones, industrial equipment and automotive applications increased steadily. In contrast, sales decreased in the Telecommunications Equipment Group and the Applied Ceramic Products Group, which includes the solar energy business. Consolidated profit declined due primarily to the recording of costs of approximately JPY23 billion, including an impairment of goodwill in the Electronic Device Group, and reduced profit in the Information Equipment Group due mainly to the impact of currency exchange fluctuations.
In summary, consolidated net sales for the nine-month period decreased 0.8% as compared to the year-ago nine-month period, to JPY1,093,030 (USD9,033) million; profit from operations decreased 26.8%, to JPY66,020 (USD546) million; income before income taxes decreased 15.1%, to JPY97,390 (USD805) million; and net income attributable to shareholders of Kyocera Corporation decreased 19.6%, to JPY59,504 (USD492) million. 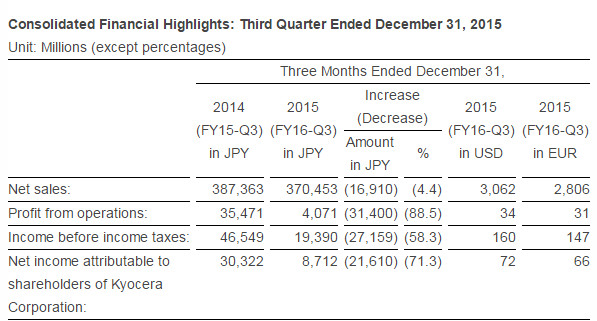 Consolidated Forecast: Year Ending March 31, 2016
During the three months ending March 31, 2016, sales of components for semiconductor processing equipment and automobiles are expected to increase steadily. However, the business environment in the fourth quarter is expected to differ from that reflected in our forecast of October 2015 due to the slowing of the Chinese economy and the effect of production adjustments among smartphone manufacturers.
In consideration of these circumstances, Kyocera has revised its full-year forecast for the year ending March 31, 2016 as set forth below. Kyocera aims to achieve these forecasts by securing orders in the information and communication, industrial machinery, automotive-related and environment/energy markets; and by leveraging the collective capabilities of the Kyocera Group for comprehensive cost reduction. 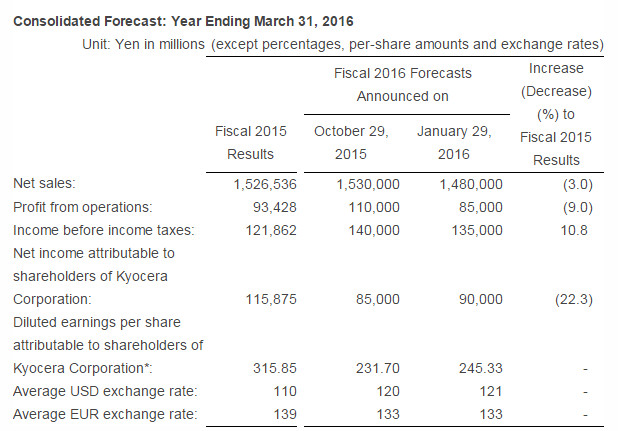